What are the Major Reasons Behind Failure of a Fridge Compressor? 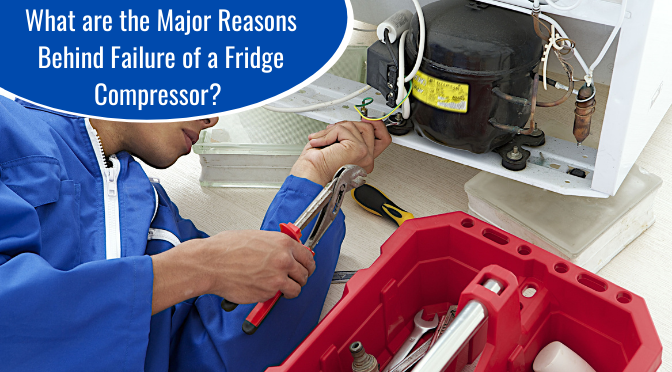 In the last blog, we discussed the signs that your fridge compressor is faulty and needs repairs. In this write up, let us discuss the major reasons why the compressor in a fridge fails.

Technically speaking, the compressor in the fridge can fail due to a number of reasons. The failure can be attributed to broken valves and scored shafts, overheating, and bent rods, misapplication and single phrasing, improper operation, inappropriate cleaning of the system….the list may go on. It is also found that replacement compressors fail almost four times more than their original counterparts.

Thus, improper installation of replacement compressors can also be attributed as one of the major causes of compressor failure, which will ask for summoning of techies for fridge repairs. Still, commonly, the compressors in fridges tend to fail because of:

This generally results in any broken or ruptured components. Slugging is the technical short term return of a definite volume of fluid or liquid, which mainly consists of refrigerant or oil or a mixture of both, entering the compressor cylinder and occupying it and pushing the super heated vapour out. This results in the failure of the compressor leading you to hire a technician for a comprehensive fridge repairs in Sydney or elsewhere depending on your location. Remember, this is a critical issue and if the compressor continues running with this damage, it will further aggravate the issue, leading to the total collapse of the system.

This is a rather straightforward reason that does not need much explanation. There can be various types of electrical problems that can cause the compressor of the fridge to malfunction.

Loss or Lack of Lubrication in the Compressor

Lack or loss of lubrication is also one of the major reasons for compressor malfunction. In fact, it is considered as one of the most significant causes. Due to lack of proper lubrications the spare parts have to run extra hard, in order to run, resulting in depreciation and malfunction of the compressor.

Again, if you want to know the cause behind lack of lubrication, there are various reasons. It can happen due to low velocity of the refrigerant , low amount of loads, errors in the suction line piping or traps in the suction, short cycling and the likes. All these can be sorted out only and only by a quality technician who is seasoned to carry out fridge repairs in Ryde or elsewhere near Sydney.

Presence of any wanted stuff in the compressor, irrespective of the volume in which it is present will lead to contamination and malfunctioning. The only and only thing that the compressor accepts is refrigerant oil. Anything other than that is considered contaminant.  Thus, air and moisture, oxides, chips, non-condensables, brazing, scale, or soldering flux, or any other form of “dirt” that enters the system either accidentally or through poor techniques of service will lead to an abrupt failure of the compressor.

Besides, the compressor also fails because of overheating.

Thus you see, there are so many reasons behind a compressor failure. Thus, these can only and only be fixed by a quality techie from a company like us at Fridge Repair Experts. Therefore, whenever the compressor fails, call us at 0468 340 685 to book a service call.